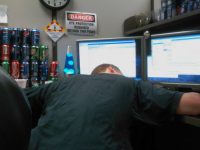 I’ve got a few blog posts lined up in my head, but I know they’re long ones and each one will take at least an hour to write (if I do them properly, which is something to which I aspire with most posts).

Unfortunately things are such that right now I don’t have the time to allow for even an hour to write a blog post. The overdue and it’s-taken-much-longer-than-it-should-have short film on which I’m working now has a final mix down date set for the 3rd of June. I’m not delighted about the fact that I’m not mixing it, but at this stage of proceedings I’ve happily resigned to the fact. Another large project is due on the 7th June, and then there’s a bunch of other small things in the works.

So, everything is on hold: playing with my fancy new camera; going out; watching movies (I can justify watching a couple of 30 minute shows every once in a while); doing nothing.

If you hear from me on here over the next two weeks, you should probably point out that I should really be working.