And the headlines, there is no news. 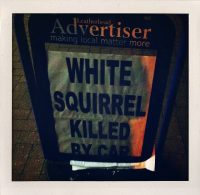 Whilst eating dinner this evening I watched an episode of QI. I’ve seen them all before, but they hold up very well to repeated viewing. Anyway, this episode included a little morsel of interestingness that on April 18th 1930, BBC Radio’s news service, lacking any news to report, instead played ten minutes of light music.

The idea that there could be a day where there is no news to report is now quite inconceivable. Instant updates bombard us with every newsworthy item (as well as updates of completely unworthy items such as “I’m eating a brownie“). The world’s too connected for such a thing to occur.

I did a quick search on the net about this day in 1930, but got distracted by the following videos, one of which I had seen before on Time Trumpet, but had completely forgotten, and another from someone on Flickr. Both videos are clever compilations of the presenter ‘pauses’ at the end of a news show as they wait for the signal that they’re off air. Nothing happens, yet I found myself laughing increasingly as the uncomfortable silences extended.

Jason Arber’s “The Day There Was No News”

This embed failed for some reason, so you’ll have to visit the video on Flickr over here.