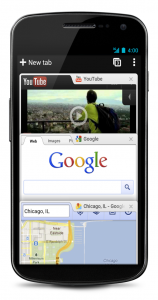 Google have just announced a beta release of Chrome for Android. They’re finally moving away from having separate desktop and mobile browsers and it looks really nice. Sadly, the beta is only available for Android 4.x users (Ice Cream Sandwich), and seeing as the install base of ICS is only about 0.8%, it’s a bit of a non-announcement in many ways.

Still, when it hits the mainstream it will be a nice addition to the Android platform and, most importantly, will save you having to do strange workarounds to get bookmarks in sync and so on.

There’s a good review of Chrome for Android on The Verge and they do point out some minor flaws that exist in the beta.

Of course, Google’s clear that this is a beta product right now, and it’s not without its flaws. As we mentioned earlier, we saw the occasional “hiccup” while zooming and scrolling pages — not normal stutter, just a seemingly random pause here and there.

However, the overall impression is positive.

We’d go so far to say that it’s good enough in its present beta form to be used as your only mobile browser, though — it’s solid, fast, and already head and shoulders above the aging app it replaces.

It certainly looks good, sporting a nice browser tabs view, and I think it will make a lot of sense on a tablet as well.

Below you can find the announcement video from Google.