A long time ago, at least in technology terms, I bought  a Cowon iAudio X5 digital media player – if memory serves me correctly it was December 2005. It wasn’t cheap at the time but it was solid, and came with 60GB of storage.

I’ve used it a lot when driving and travelling. Even now that I’ve got a reasonably large collection of music on my phone, this blocky little media player still has a place – especially when it comes to longer trips away, giving me an extra 10 hours of playing time.

Last month I plugged it in to charge and there was a tiny popping sound and the screen went blank. The device would no longer charge. At first I investigated and thought a loose battery wire was causing the issue, but a quick solder proved that thought incorrect.

A quick search of the battery part number resulted in a replacement being ordered from fusionbattery.co.uk. Once this arrived it was just a matter of installing it.

Step 1: Removing the back cover

Step 1: Remove the back cover

The screws are small, but they’re a standard Philips head, so it’s easy to get sorted.

Underneath the hard drive there’s a small rubbery moulded plastic separator. This is fairly easy to remove and you’ll see the battery with cables soldered to the motherboard.

Now you can just un-solder the old battery, re-solder the new battery (red wire bottom, black wire top), and put the device back together. 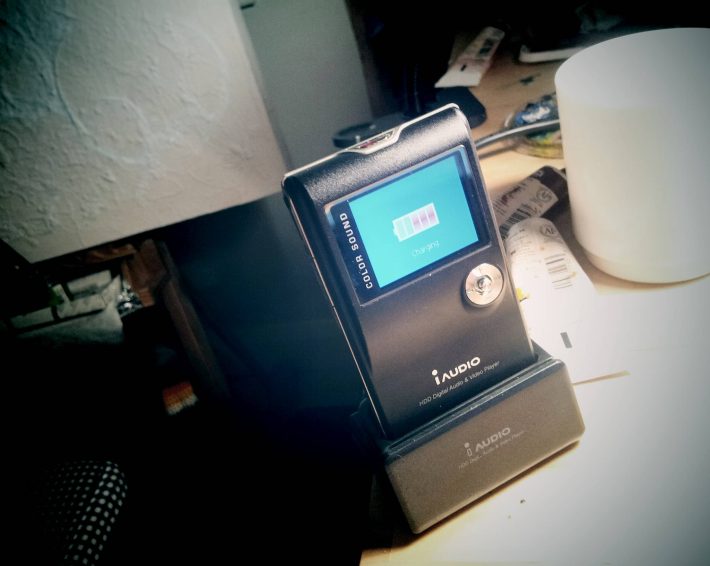 Once putting it all back together, I plugged it back into its charging dock and lo and behold she happily started charging again.

It might be old, somewhat clunky and not exactly head turning, but it works, and it continues just working. I’ve got Rockbox installed on it and lots of good music. It plays FLAC, OGG and other files types often not played by other digital media players. And it’s still going strong!