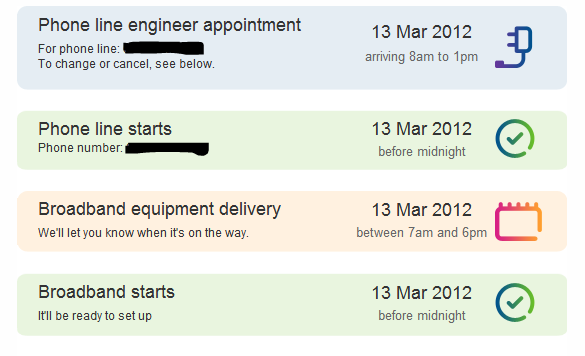 Apparently it should provide me with a download speed of 7.5Mbps. Probably about four times the speed of any previous net connection I’ve had – barring the occasional speed test I got running Mobitel HSDPA, where I sometimes got 6+Mbps.

A short history of my internet connections

As you can see I keep on moving away from places that might provide me with decent broadband. A strange thing to do considering the internet is my bread and butter. I was, for a while, considering moving to Rathlin Island where I would have either had to put up with 512Kbps broadband, or bought a HSDPA antenna booster and hoped to survive on my tethered Three mobile, assuming there were no storms or anything.

I came to my senses and realised that it was time to get a proper internet connection.