A giant X1.4-class flare erupted from the Sun on the 12th July and as a result has sent a coronal mass ejection (CME) directly towards earth. NASA’s Solar Dynamics Observatory (SDO) captured amazing images and stunning video footage through the use of its Atmospheric Imaging Assembly (AIA) which provides imaging of the Sun in “ten white light, ultraviolet and extreme ultraviolet (EUV) band passes at high spatial and temporal resolution”1. 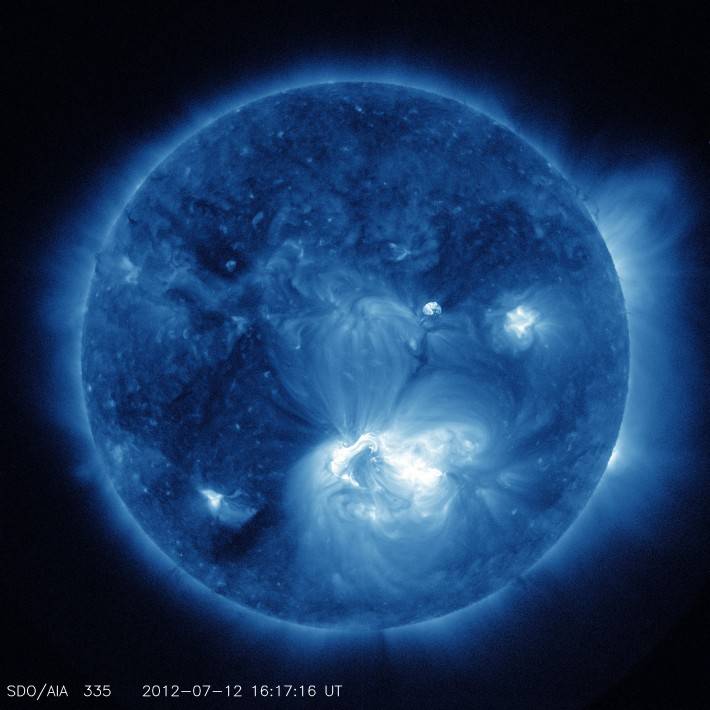 The imagery captured by the AIA is stunning and I strongly recommend checking out their website where you can see the latest imagery captured from each of the band passes. You can download hi-resolution images or watch time-lapse footage of the past 48 hours of activity from the Sun’s surface, and you can even browse a directory containing all the imagery they have captured.

The image to the right demonstrates the current auroral activity levels. If you want to see the latest prediction you can check out the POES Auroral Activity web page.

The pending CME collision should not cause alarm, but could be a cause for celebration among night sky photographers as it increases the likelihood of auroral activity at lower latitudes than normal.

This could produce aurora as far south as northern California and Alabama. This would be into central UK and Europe or southern New Zealand. At its worst it could lead to some intermittent satellite/radio navigation problems, surface charging on satellites and power grid fluctuations. But the larger storm is less likely as these are rough estimates.

I’m not even going to attempt to explain the video below in my own words. Instead I’ll let scientists who actually understand it give you the low down on what you’re seeing. Whatever it is, it’s definitely a thing of beauty.

The final shot is a composite of 171 and 335 angstrom footage.

Back in April this year, an even bigger prominence eruption occurred. I’m not sure if it’s lucky or unlucky but the associated M1.7 class CME was not directed at earth. Perhaps a flare of that size would have caused a lot more trouble, but imagine the auroras!

I’ve edited this image from SDO to focus on the flare itself. Really stunning stuff. 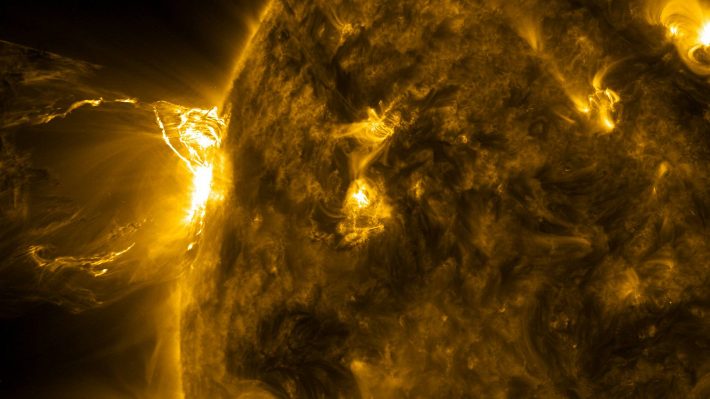 You can also watch a time-lapse movie which is quite mind-boggling to me, but also extremely beautiful.

The movie (in extreme ultraviolet light) covers four hours of activity. As we have observed in some other events, some of the charged particles do not have enough force behind them to break away and they can be seen streaming back into the Sun.

If you read this far, here’s a little bonus – I took some time to create some nice high-resolution wallpapers from my favourites of the SDO/AIA imagery.

Just right click the link in the caption and chose “Save as” or “Save link as” to download.