The day of St. Patrick

I don’t really celebrate St. Patrick’s Day, aka Paddy’s day (although it does irk me to hear people get the name wrong and call it Patty’s Day or St. Paddy’s Day). I either spend the day at home, work, or avoid Irish gatherings and hang out somewhere else. 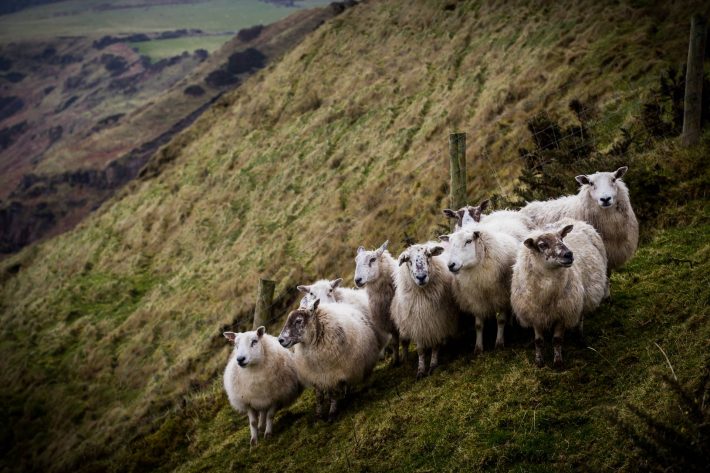 Irish or British sheep (depending on your geo-political leanings) in Ballycastle.

Am I proud of being Irish? I am quite content with my life, and it happens that I grew up in Ireland to an Irish father and a Greek mother, something which inevitably shaped me into the person I am today. Heritage is an interesting thing and it’s undeniable that it does impact our personalities, and to a lesser extent, our world view. The society around you must affect your growth as a person, but it does seem strange to me to celebrate an arbitrary coincidence of birth on one landmass or another. Perhaps you can tell that “nationalism” is not really something I get behind.

Living in Cambodia for most of the past 5 years puts me into an expatriate category. I haven’t been able to vote in Ireland since I left, and I’ve stopped paying Irish income tax (now that I am officially “non-resident” and “not ordinarily domiciled”). I’ve watched the staggering disaster that hit the Irish economy with the bank bailout and I become irate when I speak to friends that are struggling due to extra percentages taken from their wages to cover the mishaps and gross mishandling of the Irish banking system.

Do I miss Ireland? I like Ireland, I especially love some of the landscape on the south/west/north coasts. I also like Cambodia, and there are beautiful geographical locations all around the world. There are also incredible people in every country, regardless of nationality, just as there are assholes in every country, of every nationality. I have long since given up on the desire to flock together with other people on the simple basis that we plopped out of mothers’ respective wombs onto a patch of land which happened to be in the same geographical area that someone, long ago, decided to draw borders around and call a nation.

Very occasionally you could say that I get sucked back in to nationalist sentiment, usually around sporting events, but I’m less and less interested in sport as I get older so that’s occurring with decreasing frequency. It delighted me to see Greece win the Euro Cup in 2004, and to see the Irish cricket team beat Pakistan and England in the Cricket World Cup. However, much of that delight came from seeing an underdog triumph, instead of truly nationalist sensibilities – I was also thrilled to see Spain win the World Cup mainly because it had never won before and it was a sort of running joke that this fantastic collection of players never wins. The Spanish people’s morale also needed a bit of a boost with their economy tanking like an Irish or Greek economy.

To me, it seems a dreadful indignity to have a soul controlled by geography.
George Santayana

Perhaps growing up on the island of Ireland, a landmass which saw people beating the shit out of each other for many years over which flag we wave about, influenced my thoughts on this subject, and as a result I have tired of any day that promotes excessive waving of flags?

To end on a lighter note, here’s Eddie Izzard making funny about flags.

Disclosure: I don’t drink alcohol (gave up in ’97) and this may make me slightly less receptive to a national holiday that has become one celebrated by people attempting to ‘achieve advanced states of mental incompetence by the repeated consumption of fermented vegetable drinks’ 1.