I came across this wonderful web comic the other day which cracked me up but also got me thinking. You can see the original on Extra Fabulous Comics. 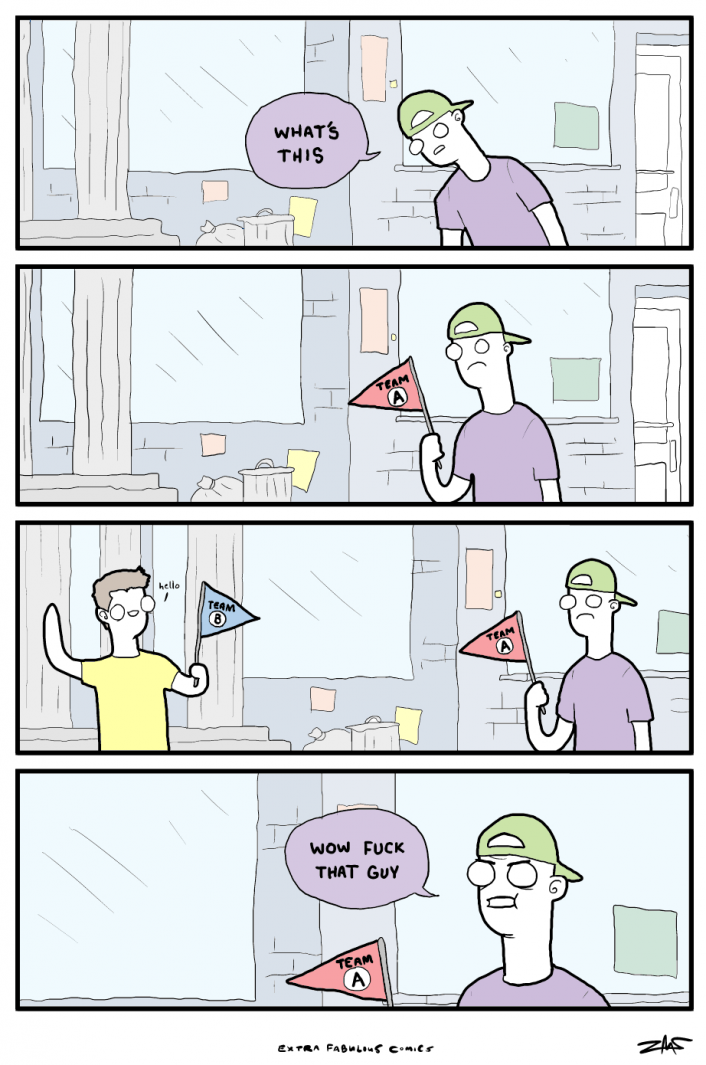 I’m currently reading “Failure is not an option” an autobiographical book written by Gene Kranz, a NASA Flight Director during the space race in the 60’s. I’ve been slightly saddened to see just how much of this scientific and exploratory push was driven by Team A vs Team B, in this case America (fuck yeah) vs Russia, with the author frequently talking about America (Team A) being first to do X, Y or Z, and at critical moments explaining how he was singing the star-spangled banner in his mind.

I guess I was hoping that underneath that competitive veneer it would have been far more about the unified need for knowledge expansion, but whilst I’m sure that for many of the people involved it really was about more than ‘competition’, it certainly feels that for the people in charge (and of course the the people signing the cheques), it was far more about beating the other guy than anything else.

That said, I do believe that many of our scientific advances are not just a result of some pre-ordained human competitive will, but rather a real belief in the betterment of all people, regardless of race, creed or ‘which side they’re on’. However in society at large we still seem hell-bent on entrenching ourselves in a black and white world.

Whether it be east vs west, generic sports team A vs generic sports team B, Christian vs  Muslim, Android vs iOS, or coke vs pepsi, the simple act of polarisation just seems to get people going. Marketers and businesses, politicians, and religions all seem to thrive off this simple concept of polarisation to further their cause, and we, the people, seem to fall for it every time. We are blindly loyal to Team A.  It’s basically George Orwell’s 1984 played out over and over in all walks of life.

Competition has driven, and continues to drive, a lot of the progress made around the world, but its also a driving force (or possibly excuse) for a lot of malice and I think it’s important for people to remember that the ‘opponent’ is just as human as yourself, replete with basically all the same wishes, needs, and hopes.