On a lack of desire to visit America

It is with much incredulity I follow the continuing stream of outlandish stories coming out of America following the rise to power of Mr. Trump. Frequent reports of situations of people being denied entry to the US for little or no logical reason certainly makes me wonder whether I’ll ever visit that country again.

I have passed through US border control five times since  2001.

I flew to Chicago in January 2001 on a stop-over to Toronto in Canada where I was going to spend approximately 6 months on a tourist visa. I remember little about that stopover, and given that lack of memory I can only assume that it was entirely without incident.

Whilst living in Toronto, my good friend Rob had occasion to visit New York and asked if I wanted to accompany him on a weekend getaway. Again, given my lack of memory of the border crossing I can only assume it went without issue. Although the trip was notable in that, on my first ‘real’ visit to the US, I managed to see someone discharge a firearm within a few hours of crossing the border. Rob and I had the misfortune to have three deer sprint out in front of his enormous SUV, two of which were killed instantly but a third was left badly wounded by the side of the road. Moments after we stopped, a US State Senator pulled up beside us on the interstate and called the incident in to the highway patrol. After that the senator’s bodyguard took out his gun and shot the deer. Shortly after they departed, the highway patrol officers arrived and were fuming that the bodyguard had shot the deer. I couldn’t help wondering if that was because it robbed them of an opportunity to shoot something.

About 7 months later in July 2001, after hitch-hiking from Toronto to Vancouver, I met up with a friend of mine and we went to Vancouver Island. From Victoria we booked a ferry to Port Angeles in Washington state. Here I encountered my first issue with US Border Control. Officially I had used my one-per-year 90-day visitor visa when I had my 3 hour stop-over in Chicago 7 months previously.

With the ferry getting ready to depart I was grilled for a short while about my visit with it initially looking as though I would be barred entry.

I showed my flight tickets from San Francisco to London booked for the first few weeks of August; I explained how I had to return to Europe for my brother’s wedding in September; that I couldn’t afford to buy new flights from Canada; and confessed my ignorance that my earlier stop-over was going to cause issues at this point. As the ferry’s foghorn went off to express its imminent departure the custom’s officer relented and let me through with a fresh 90-day visa. I can only imagine this would have gone a lot less smoothly after September 2001, and if was I not white.

I had been fortunate to take advantage of a free-flights deal from HP (buy a digital camera, get a flight to Europe, buy another tech item from a list which happened to include an inexpensive printer, get a flight to the US – I jumped at the offer, bought the items, promptly sold them, and netted my free flights!).

I flew in to Boston and once again have little memory of the customs entry. Again, a white entrant with return flights booked on a tourist visa, there should have been little issue.

I spent some time in New York with my friend Jana, before catching a bus to Toronto to re-visit my friends there. Entry to Canada was quick and painless.

My return from Toronto to New York was quite notable. The Greyhound bus stopped at US border control and we all got off to filter through customs. The customs officer remarked on his Irish heritage before happily stamping my passport, but the passenger directly after me was not so lucky.

She was a university professor and Canadian resident. I confess I am a little hazy on the details, but I believe she was travelling to New York to commence a new position teaching at NYU. She had all of the requisite visas and so on. However she was of Iranian descent.

Our bus was detained for 3 hours at the border whilst she was interrogated. She was not allowed through. We continued on, my fellow passengers all expressing utter disbelief at the situation.

I don’t think I can possibly express in a few words the breadth of stories that have cropped up since Trump took office.

The core sensation I feel is that the United States is not somewhere I wish to visit anymore.

The EFF recently published a pocket guide filled with advice for those needing to cross US customs. 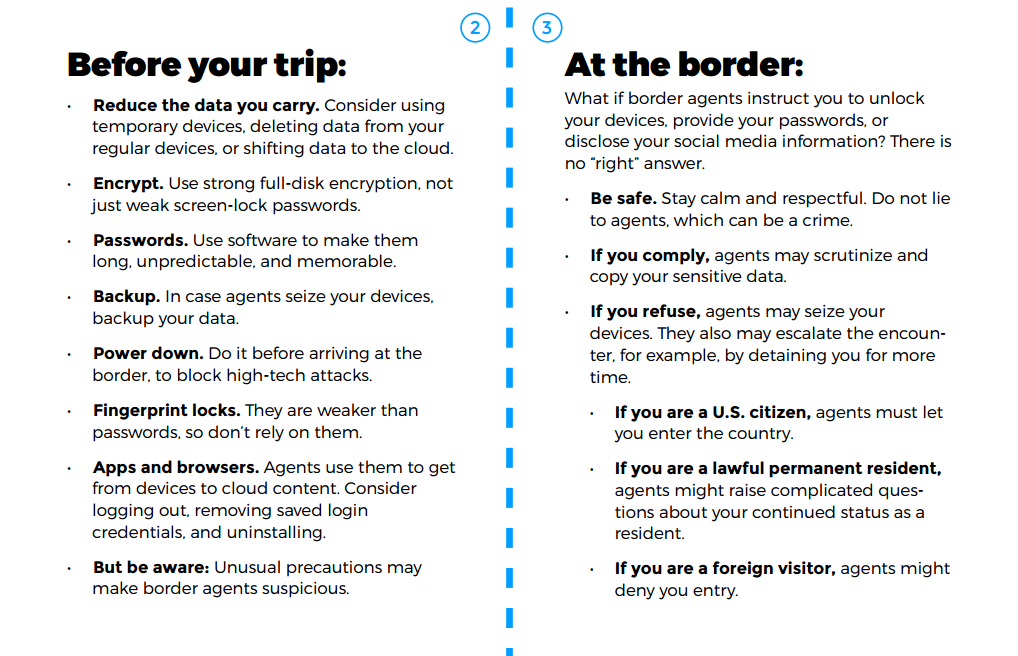 In all my years of travelling, the concept that I would need to even think about these things in order to entry a country is completely alien to me.

Stories about NASA engineers being denied entry despite having freely enrolled in heightened security checks; school teachers refused entry; Syrian oscar-nominee denied entry; Norwegian ex-PM detained for questioning; and then this morning I read about the band Soviet Soviet from Italy being denied entry:

It doesn’t seem to matter even if you’re not muslim (not that religion should matter) and have valid reasons for entering the United States.

Even though, in theory, I’d have no reason to be denied entry, all of these tales – combined with the increasingly outlandish demands being made on people who wish to enter the US, and the frequent stories of mistreatment and disrespect from US immigration – do not make the prospect of visiting the US in any way appealing.

It’s been 12 years since I last visited, and I will say that New York was incredible. Sixteen years ago I loved hitch-hiking down Highway 101 to San Francisco.

However, if wishing to visit a country entirely built on the back of immigration may mean subjecting oneself to fear, suspicion and potential investigation of one’s online personas, I think I’m happy to stay away and visit any of the numerous, more-welcoming countries in the world.